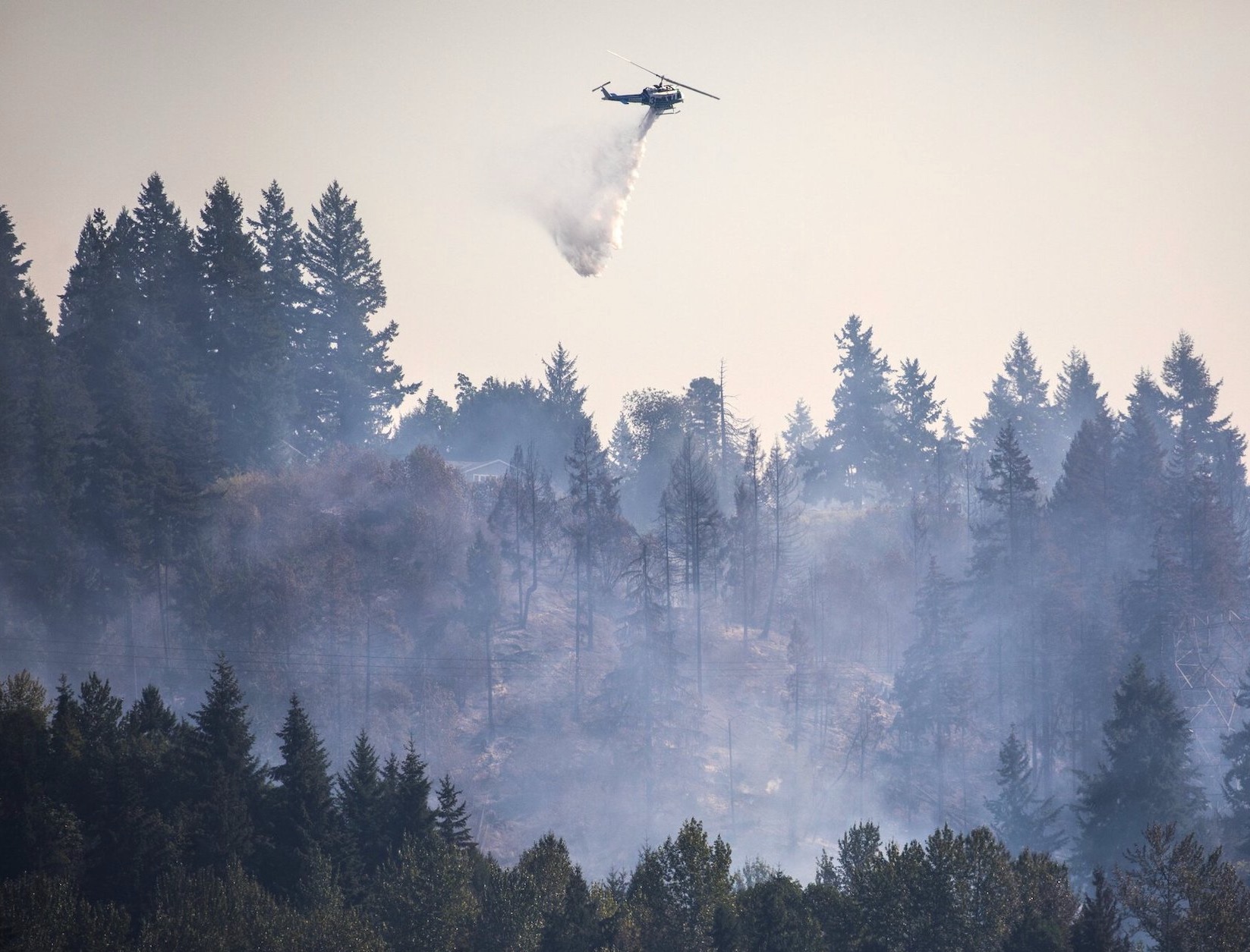 Wildfire season is here, and it’s here to stay. By that we mean that those luxurious, infamous Western Washington summers of ten years ago – without smoke, drought, excessive heat, fire risk, and never-ending burn bans – are a thing of the past. This is a really hard pill to swallow: the fact that climate change is and will continue to permanently alter our local environment, health, safety, and livability. Until relatively recently, climate change has been positioned as a far-off, intangible concept based on projections rather than immediate impacts. Here we are in 2021 and those projections are beginning to unfold, with worse impacts yet to come.

This is not to say that, historically, the Pacific Northwest hasn’t experienced wildfires (see this NPR story for a GIS-mapped historical account of fires across the US). Forest fires have been a crucial component of forest ecology and indigenous land management for millenia. This article by the Pacific Biodiversity Institute describes the numerous ecosystem benefits of fires, including controlling insects, adding nutrients to the soil, and clearing undergrowth. The problem: foresters have actively prioritized fire suppression for much of the 19th & 20th centuries, allowing dense stands of trees that provide more fuel for fires and creating forests ripe for catastrophic burn.

Only recently have we begun to see a shift away from this norm – experts are learning that fires have become more widespread and severe as a result of these practices, turning instead to prescribed burns and new innovative land management methods to prevent catastrophic fires. This article by Peaks to People Water Fund is a great resource for a full list of benefits of prescribed burns.

Indigenous communities have historically used prescribed burns to prevent severe fires (see this Grist video, for example), but this has come into conflict with the Forest Service’s continued emphasis on directing funding toward suppression rather than prevention (see this article about tension between agencies and indigenous groups in Oregon). While agencies have a long way to go, the movement to repatriate land back to Indigenous communities and to incorporate their perspectives and participation in land management decisions is already having positive environmental impacts, according to this Yale article.

The importance of better land management to prevent fires is paramount. New research continues to demonstrate the detrimental impact of fires on ecosystems and environmental health. The deterioration of air quality, for example, contributes to declines in respiratory health, neurological health, and has been known to cause cancer and cardiovascular disease. Thankfully, Washington has released new wildfire smoke regulations to protect outdoor workers. While these adaptive responses are necessary, the primary focus must be on preventing and mitigating fires in the first place.

Climate change-induced wildfires – fires that are more common, severe, and catastrophic – also have disastrous ecosystem impacts that far exceed historical benefits. Often overlooked is the environmental impact of wildfires on watersheds and the direct correlation between watershed health and forest health. Burned areas aren’t able to capture, filter, and regulate water properly, and rain events after a fire can lead to intense erosion and flooding. Also, as the Stanford Water in the West blog points out, “the high density of trees [in a fire-suppressed landscape] can negatively impact the supply of water reaching streams, as densely spaced smaller trees intercept and use more water than fewer large trees.”

As with all environmental problems, ecosystem impacts create human impacts: deteriorating watershed health results in poorer water quality and supply, particularly for underserved, low-income communities. Confluence West’s recent report on this subject found that “more than 60 western communities rely on water sourced from upstream forests for part or all of their water supply – all of these forests are at risk for catastrophic wildfire.”

Relatedly, erosion associated with poor watershed health has huge economic ramifications. Consider this case in Denver: In 2013, it cost Denver Water $18.5M to dredge sediment – caused by rain following a catastrophic fire – out of the Strontia Springs Reservoir. All of the sediment they previously dredged is now back in the reservoir due to a lack of post-fire recovery efforts. Denver Water would experience a return on investment from watershed investments if they could prevent just 5% of the sediment coming into the reservoir. Another report from Earth Economics and the Forest Service provides a solid case for the economic benefits of fuel treatment efforts in the drinking watershed that serves the City of Santa Fe, NM.

The good news: in areas where prescribed burns and forest thinning is being implemented, land managers are seeing evidence that these practices slow fires, cut heat, reduce long-term damages, and give firefighters a better chance of success. For example, the Nature Conservancy treated the Sycan Marsh Preserve where the Bootleg Fire reached earlier this summer. As a result of these treatments, when the fire met the preserve there was not enough ground fuel for the fire to burn as hot or reach as high (see this Grist article for more).

The scale of funding needed to implement forest thinning, prescribed burns, and other wildfire land management practices is not insignificant, but the Biden administration isn’t shying away from large infrastructural investments, particularly as they relate to climate. A new report from the Nature Conservancy indicates that we need at least $5B per year over the next 10 years to support wildfire risk reduction and resilience. As this new Seattle Times op-ed by Hillary Franz, Phil Rigdon and Mike Stevens aptly writes, “Wildfire resilience is not just a land management issue. It’s a matter of public health, equity, safety and a climate-resilient future… It’s time for the federal government to further support these priorities with the transformative level of funding needed to meet the scale of the problem.” Once signed into law, the infrastructure package will yield billions of dollars for improving forest and watershed health: fuel reduction, forest thinning, prescribed burns, increasing federal wildland firefighters’ wages, research/monitoring, and more.