Rethinking Infrastructure to Include Natural Spaces 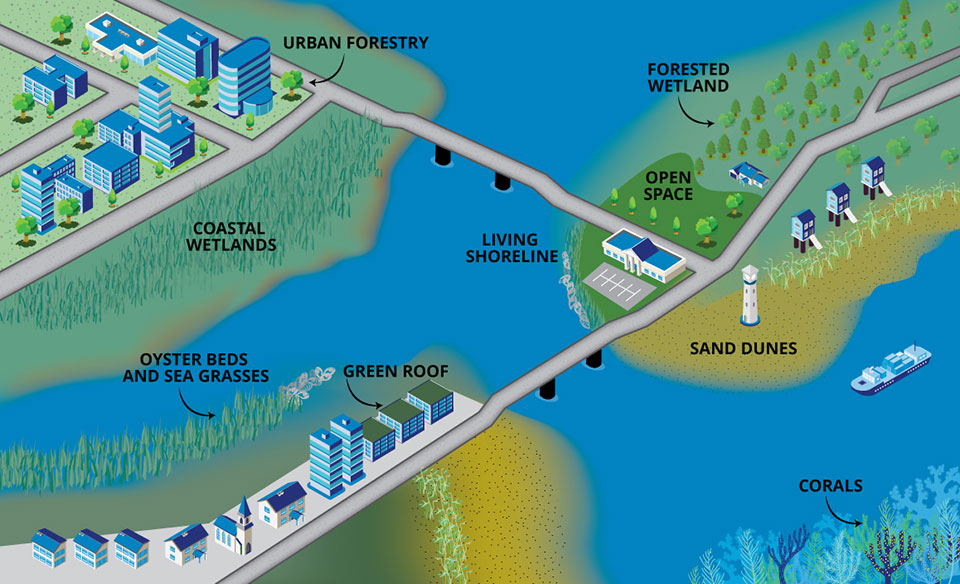 When most Americans think of infrastructure, the first thing that usually comes to mind is large-scale transportation and civil engineering projects – highways, bridges, railways, dams and airports. These kinds of projects were essential to the country’s economic growth and success in much of the 20th century and remain in desperate need of continued funding for maintenance and replacement. However, this more traditional definition of infrastructure doesn’t encompass the needs and existential challenges of the 21st century; one predicated on a systems approach that integrates people and place with an economy and environment that is intertwined with measures of livability, human health and well-being.

Enter: natural infrastructure. This represents open spaces of all kinds like parks, forests, wetlands, farms, watersheds, and ocean resources – natural areas that are no longer considered solely for resource extraction or recreation, but instead are vital for environmental health and consequently the lives and livelihoods of people. Communities rely on natural infrastructure to protect them from extreme drought and heat (see our other blog post about urban heat islands), sea level rise, hurricanes, flooding, and other impacts caused by climate change. In addition to building resilience and reducing catastrophic risk from natural disasters, natural infrastructure yields benefits for water quality, renewable energy sources, air quality, stormwater management, and agricultural productivity by boosting soil quality, to name a few. Plus, there’s an ever growing body of evidence of the physical and mental health benefits that come with routine access and connection to nature (see the new study by Stanford’s Natural Capital Project).

Thankfully, the Biden administration has embraced a more holistic view of infrastructure that addresses much-needed resilience to climate impacts, including the protection and restoration of major land and water resources. For example, the Conserving and Restoring America the Beautiful report (usually referred to as the 30×30 plan) seeks to combat the negative impacts of the loss of biodiversity and climate change by protecting more natural areas while improving access to nature for communities that lack it.

Biden’s much larger and more comprehensive American Jobs Plan (also referred to as the infrastructure plan) holistically addresses traditional and natural infrastructure, environmental justice and economic growth. This infrastructure approach intends to improve and upgrade the country’s existing infrastructure with investments in roads, bridges, and transit systems  and create additional green jobs through investment in clean water systems, renewable energy, green building, and conservation practices. The plan also calls for establishing a new Civilian Climate Corps (see this NPR article), building on the Civilian Conservation Corps that rose out of the New Deal in the early 20th century.

Biden’s infrastructure plan is no small feat, nor is it a small deal. As Senator Patty Murray wrote in the Seattle Times, “We should all take personal responsibility to make the planet a better place now and for our kids, but the most impactful things we’ve got to do are across our economy, as a country… The forthcoming infrastructure proposals currently being negotiated in Congress are our best chance in decades at tackling the climate crisis in a meaningful, systemic way.” Unfortunately, the bill has been steadily stripped down due to criticism from those that see the plan as an overreach that strays too far from the traditional definition of infrastructure.

The word infrastructure literally means “below structure” – the basic, underlying framework or features of a system or organization. The historical lack of investment in environmental infrastructure, and the resulting ever-growing impacts of climate change, makes it clear that we are missing a primary component of this underlying framework. Like a bridge with a cracked pier, this lack of a comprehensive framework will only continue to degrade the whole structure, making it at-risk for failure or unsustainable in the long term. If infrastructure, by definition, really addresses our society’s underlying framework or system, natural infrastructure should be a key component – it is the air we breathe, the water we drink, the land we live on, the land that produces the food we eat, and the forests we rely on for oxygen, water quality, building materials, relief from urban heat, and the list goes on.